Weekly Communion: An Ancient Path to the Future 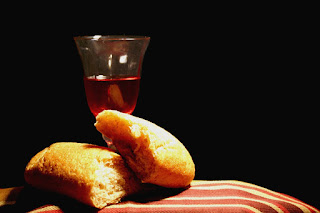 Jesus desires an active encounter with us through the weekly breaking of bread. In fact the first thing Jesus wants to do if the church in Laodicea will welcome him back into their gathering, is to come in and eat (see Revelation 3.20). Most of us are familiar with the idea that King Jesus is active among us when the Scriptures are proclaimed. However, in our tradition we have often failed to recognize that the Holy Scriptures teach that Jesus is also made known to us through the breaking of bread.

When he was at table with them, he took the bread and blessed and broke it and gave it to them. And their eyes were opened, and they recognized him. And he vanished from their sight. They said to each other, “Did not our hearts burn within us while he talked to us on the road, while he opened to us the Scriptures?” And they rose that same hour and returned to Jerusalem. And they found the eleven and those who were with them gathered together, saying, “The Lord has risen indeed, and has appeared to Simon!” Then they told what had happened on the road, and how he was known to them in the breaking of the bread. (Luke 24.30–35, ESV)

Brothers and sisters, our prayer is for Jesus to be made known to us more and more so that he will be made known more and more in Somonauk, Sandwich, and the surrounding communities. We believe one of the primary ways he is made known is through our weekly celebration of the Lord’s Supper. This is the first reason to come to the Lord’s Table at our regular worship gathering - because the breaking of bread is one of the ways Jesus is present to his people. Secondly, all New Testament churches received the Lord’s Supper weekly. This is established in passages such as 1 Corinthians 11.17-20 as well many references in the book of Acts (2.42-46; 20.7-11). What’s more, not celebrating weekly not only puts a church out of step with New Testament congregations, but also with the church of the first five centuries of the Christian Era. This is established by documents such as the Didache. The Didache was a first century document some historians argue was produced by the Apostles to help leaders establish congregations that are faithful to the instructions of Jesus and the Apostles. In the section titled, “On the Lord’s Day,” These simple instructions from around the time John wrote his Gospel are given.

On the Lord’s day, gather yourselves together and break bread, give thanks (Gk: eucharisteo), but first confess your sins that your sacrifice may be pure (Didache, 14.1).

Beloved, the society in which we live is changing even more rapidly than we are able to recognize. This means the message our congregation proclaims to our community must be fresh. That is, our gospel must address questions and issues that our culture is raising. Not only must our message be fresh, even more importantly our message must be faithful. As we move into the challenges of the future, we are wise to make sure our faith is rooted in the same faith of those who have gone before us. As we move toward a worship gathering that more faithfully reflects the gatherings of the early church, our prayer is that we will find the good way into the future and and the life promised by the Prophet Jeremiah.

Thus says the LORD: “Stand by the roads, and look,  and ask for the ancient paths, where the good way is; and walk in it,  and find rest for your souls (Jeremiah 6.16, ESV)

Take to heart this encouragement from the late Robert Webber.

How do you deliver the authentic faith and great wisdom of the past into the new cultural situation of the twenty-first century? The way into the future, I argue, is not an innovative new start for the church; rather, the road to the future runs through the past.

Click here to listen to yesterday’s message, A Meal.