Introducing the Revelation: Part One 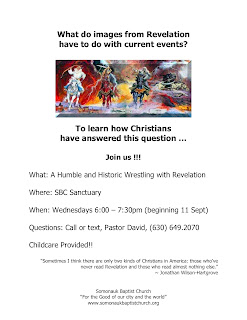 Last week we began our introduction to our series that will take us through the book of Revelation. We are calling it, A Humble and Historic Wrestling with the Revelation. We chose this title for a number of reasons. Humble – because we will endeavor to refrain from being people who read the Revelation to figure it out! Historic –because we will strive to be sensitive to the historical context of John and the seven churches to whom he writes.

During our first study we explored what is means for the Revelation to be an apocalypse and a prophecy.

o     The Revelation is an apocalypse.

An apocalypse is a genre of revelatory literature with a narrative framework, in which a revelation is mediated by an otherworldly being to a human recipient, disclosing a transcendent reality which is both temporal, insofar as it envisions eschatological salvation, and spatial insofar as it involves another, supernatural world (John Collins).

o    Apocalyptic literature is born out of great oppression and persecution.

o    Apocalyptic literature is presented in the forms of visions and dreams and language that is cryptic and symbolic.

The most important of these devices was pseudonymity, that is, they were given the appearance of having been written by ancient worthies(Enoch, Baruch, et al.), who were told to “seal it up” for a later day, the “later day” of course being the age in which the book was now being written(Fee and Stuart).

o    Images from apocalyptic literature are often forms of fantasy, rather than of reality. Apocalyptic writes combine earthly and other-earthly images (i.e. a woman clothed with the sun [12.1], locusts with scorpions’ tails and human heads [9.10]).

o    Apocalyptic literature is formally stylized. Writers divide time into neat packages and symbolically use numbers for the purpose of expressing one big truth when the sets are put together.

“To prophesy” does not primarily mean to foretell the future but rather to speak forth God’s Word in the present, a word that usually had as its content coming judgment or salvation (Fee and Stuart).

o   Prophets speak words of comfort and/or challenge, on behalf of God, to the people of God in their historical situation.

Since Revelation is a word of prophecy in the biblical tradition, we must take care to understand that its primary purpose is to give words of comfort and challenge to God’s people then and now, not to predict the future(Gorman).

Revelation is prophetic in its words of challenge as much as it is in its words of comfort. That is, Revelation as prophecy should probably be understood as anti-assimilationist, or anti-accomodationist, literature. It is also in this sense that Revelation is resistance literature –“a thorough-going prophetic critique of the system of Roman power” and “the most powerful piece of political resistance literature from the period of the early Empire (Gorman).

Big Idea: As we introduce our study of the Revelation we have learned to take seriously the nature of the Revelation as an apocalyptic and prophetic document. Both of these types of documents are written with the specific purpose of addressing the immediate needs of the original author and audience. Our study, therefore, will pay special attention to the suffering John and Antipas (2.13) are enduring and the suffering that is soon to descend upon the seven churches who originally received the Revelation.

Fee, Gordon D. and Douglas Stuart, How to Read the Bible for All Its Worth: A Guide to Understanding the Bible. Grand Rapids,MI: Zondervan, 1993.

Poythress, Vern S. The Returning King: A Guidebook to the Book of Revelation. Phillipsburg, NJ: Presbyterian and Reformed Publishing Company, 2000.
Posted by David B Johnson at 11:14 AM No comments: