Remembering our baptism is graciously intended by God to remind us who we are. In order to remember who we are, we must remember where we are. This is the message of Romans 6. God’s grace has super-abounded (Rom 5.20) to destroy the chains that bound us to Adam, Sin, and Death. This liberation was secured by Jesus’ death, burial, and resurrection and our baptism narrates that story of freedom. Just like the Hebrew slaves were set free from Egypt by the death of a firstborn and unblemished lamb, so we have been redeemed by the Lamb of God who takes away the sin of the world. Just like the Hebrew slaves passed through water on their way to the Promised Land, so we pass through the waters of baptism as our journey toward the New Jerusalem begins. Just like like the Hebrew slaves wandered and suffered in the wilderness before arriving in Canaan, so we groan and suffer by the Spirit until we are resurrected in the new creation (Rom. 8.18-25). Just like the Hebrew slaves, we forget that we have been set free from Egypt and we even want to go back sometimes (Numbers 11.4-6). With this idea of liberation and location in mind, it seems the prepositions in Romans 6.1-4 are quite important.


What shall we say then? Are we to [remain] in sin that grace may abound? By no means! How can we who died to sin still live in it? Do you not know that all of us who have been baptized into Christ Jesus were baptized into his death? We were buried therefore with him by baptism into death, in order that, just as Christ was raised from the dead by the glory of the Father, we too might walk in newness of life. (Romans 6:1–4, ESV)

We aren’t in Egypt anymore. We aren’t slaves anymore. Death and sin no longer make demands of us that we are obliged to obey. Brooks Hatlen was released from Shawshank Prison after a 30 year prison sentence. The slavery of Shawshank was so engrained in him that he could not tolerate the freedom of life on the outside. Brooks took his own life and this is the note he left behind.

Dear fellas, I can't believe how fast things move on the outside. I saw an automobile once when I was a kid, but now they're everywhere. The world went and got itself in a big [blasted] hurry. The parole board got me into this halfway house called "The Brewer" and a job bagging groceries at the Foodway. It's hard work and I try to keep up, but my hands hurt most of the time. I don't think the store manager likes me very much. Sometimes after work, I go to the park and feed the birds. I keep thinking Jake (Brooks’ 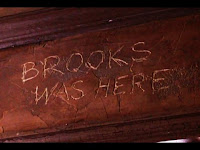 pet crow from prison) might just show up and say hello, but he never does. I hope wherever he is, he's doin' okay and makin' new friends. I have trouble sleepin' at night. I have bad dreams like I'm falling. I wake up scared. Sometimes it takes me a while to remember where I am. Maybe I should get me a gun and rob the Foodway so they'd send me home. I could shoot the manager while I was at it, sort of like a bonus. I guess I'm too old for that sort of nonsense any more. I don't like it here. I'm tired of being afraid all the time. I've decided not to stay. I doubt they'll kick up any fuss. Not for an old crook like me.

Sometimes it takes me a while to remember where I am. May the Spirit of God graciously lead us to recall who we are and where we are. We have been crucified with Christ and life we now live, we live by the faithfulness of the Son of God who loves us and gave himself for us. Thanks be to God.

Click here to listen to yesterday’s sermon, Death, Resurrection, and Baptism.
Posted by David B Johnson at 8:50 AM No comments: